Before establishing Jai Talad, Charucha was working after a ‘farmers’ shop’ funded by Kasertsart University. However, due to the high costs, the shop was shut down. Using the connections and knowledge earned, she went on to organise various farmers’ markets and shops around Thailand. To do so she had to travel extensively around the country to different regions, getting to know the farmers and learn about the different agricultural outputs found in each part of Thailand.

One of these shops was a pop-up farmers’ shop which not only sold the produce she grew herself, functioned as a middleman of sorts between farmers and consumers.  Running this shop was the first time she met her future business partner, Chokchai Larbnongsaeng as well as where she met people who would become the future customer base for Jai Talad.

From the hands-on experience, Charucha gained an in-depth understanding and knowledge of Thailand's agricultural outputs.

Through various projects she is and has been a part of, Charucha has become one of the main practitioners leading and shaping the organic agriculture and farmers’ market environment in Thailand. Working directly with farmers across the country, she has been responsible for helping push man farmers towards organic agriculture.

Jai Talad emerged from the ‘Farm Concept’, a project funded by the Thai Health Promotion Foundation, which was run by Chokchai. The project established a vendor and customer database, as well as the idea to use markets to promote healthy diets. These things went on the lay down the bare bones for Jai Talad. After the Farm Concept closed, the donors asked Chokchai if he wanted to continue the work, and all the concepts established were transferred to Jai Talad, giving the market a strong foundation to build upon.

Hand's off approach
While Charucha travels to different parts of the country meeting directly with farmers to learn about their produce and recruit vendors herself, she also found that sometimes a hands-off approach can also be more effective in reaching Jai Talad's goals. This is seen with how the vendors interact with each other and the pressure formed.

Through the platform, vendors get to meet and learn from each other and a friendship is formed. In this environment, friendly competition is created where the farmers are constantly trying to improve their operations and become better than others. They see what their friends are doing or selling, what’s working and what’s not. The close environment helps organic farmers improve. At the same time, the vendors also act as a screening system for the market. They find out if a farmer's produce is not organic and pressures them to change. The vendor's friends back home seeing the success of Jai Talad are also encouraged to change, and become vendors themselves.

While Jai Talad is mainly known for the online and offline farmers’ market, the market itself is only a small part of a much larger picture. Farmers' markets alone are not effective enough to meet the goals set out by Chaucha and Chokchai. There is also a need to develop farmers. By allowing the farmers to interact freely, this is achieved.

With the family heavy consumer base of Jai Talad, there is also pressure for the farmers to adapt to meet their demands, including the need for organic produce, the removal of plastic bags, and the need to maintain cleanliness.

None of these things are enforced directly by Charucha, but she let the pressure from the customers and other vendors push the farmers towards better practices.

A' La Campagne event
JaiTalad at A La Campagne: Farm & Folk Market to Chef Table was the first Jai Talad event to be hosted outside Bangkok. With a cafe, restaurants, a farm with free-range chicken, and various children-friendly activities, A' La Campagne in Pattaya drew in many families and was the ideal location to host a Jai Talad event.

Apart from the ideal customer base, A' La Campagne was also chosen as the location for the event due to Charucha having worked with the owner before in the past. Moreover, its location in the east of Thailand made it easy for Jai Talad, who already had a farmers base in the eastern provinces around Pattaya, to source vendors to set up booths at the market. Additionally, according to Charucha, the east was the area most ready in terms of food and produce, ensuring the market had a d iverse array of food available. 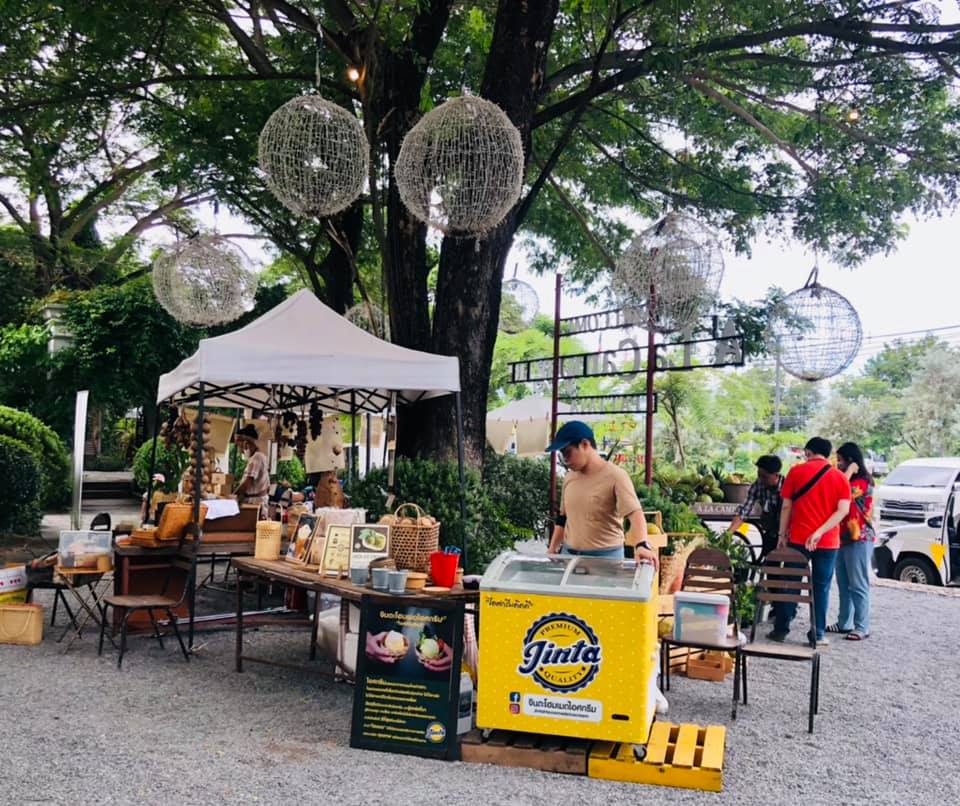 WWF Thailand’s role.
WWF Thailand, particularly the Sustainable Consumption and Production team, has been involved in supporting the Jai Talad market from the beginning. At this A' La Campagne event, the team traveled to Pattaya and set up a booth for Eat Better, the online social media campaign, in order to educate the attendees and raise awareness on sustainable consumption practices, and the impact consumption choices have on the environment. 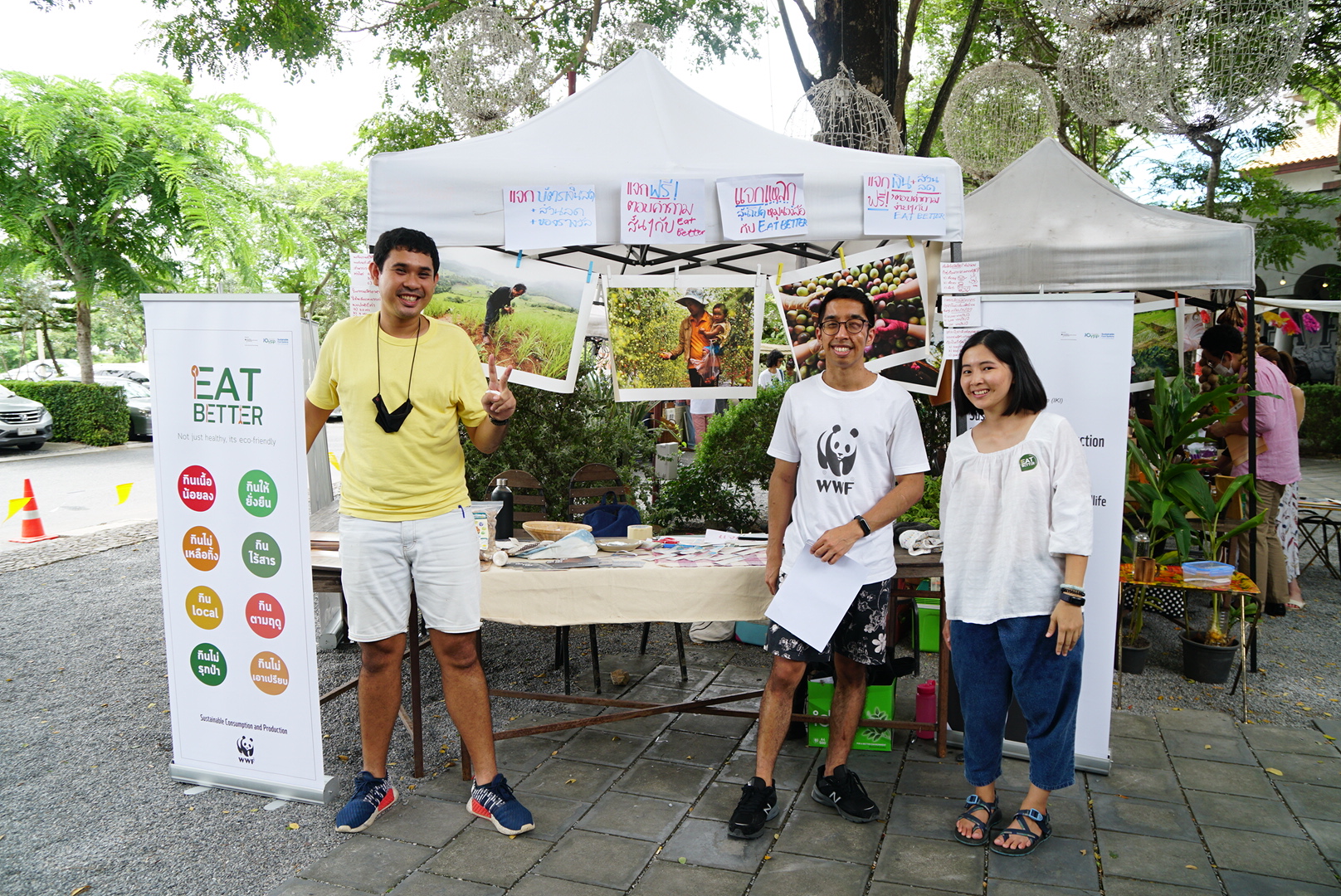 Charucha Thongphinit, ingredient curator.
Due to Charucha’s experience and knowledge of the Thai agricultural landscape, throughout the years many chefs have contacted her for help. When chefs were opening new restaurants they would ask her if she had certain ingredients they needed for their menus.  She was also often contacted by chefs asking about specific traditional local ingredients, where to find them and how to use them. Knowing what ingredients could be used in which way and who grew them, Charucha was able to help the chefs to find the ingredients with the right profiles that suited their needs and introduced to them to the right farmers, creating a mutually beneficial relationship. Many of these chefs went on to have long term partnerships with the farmers.

In a way, by helping them source the product to perfect their menus and dishes, Charucha became an ‘ingredient curator’ for these chefs. 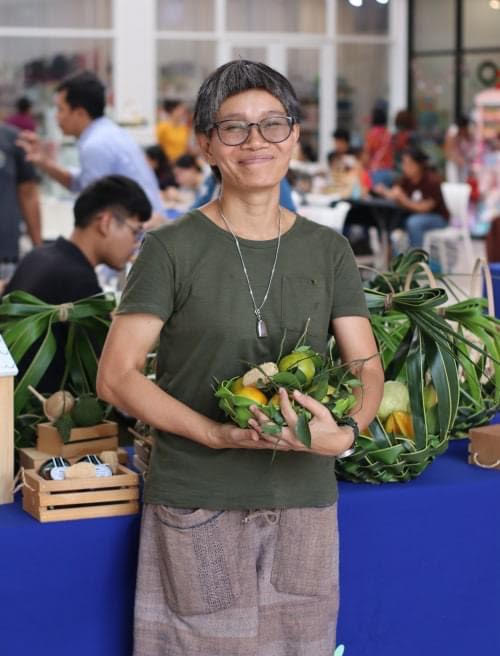 Chef’s table with Chef Poom.
At Jai Talad, vendors and Charucha are often asked by customers, how certain produce can be used. Her experience connecting the chefs to farmers led her to realise this was a great way to increase produce value and consumer knowledge. If local ingredients are used by chefs, not only will this help consumers better understand how local ingredients can be used, increasing the likelihood of purchase, By incorporating them in restaurant dishes, consumers will also come to value the local ingredients more. The same effect can be achieved with the produce found at Jai Talad with a chef’s table event. 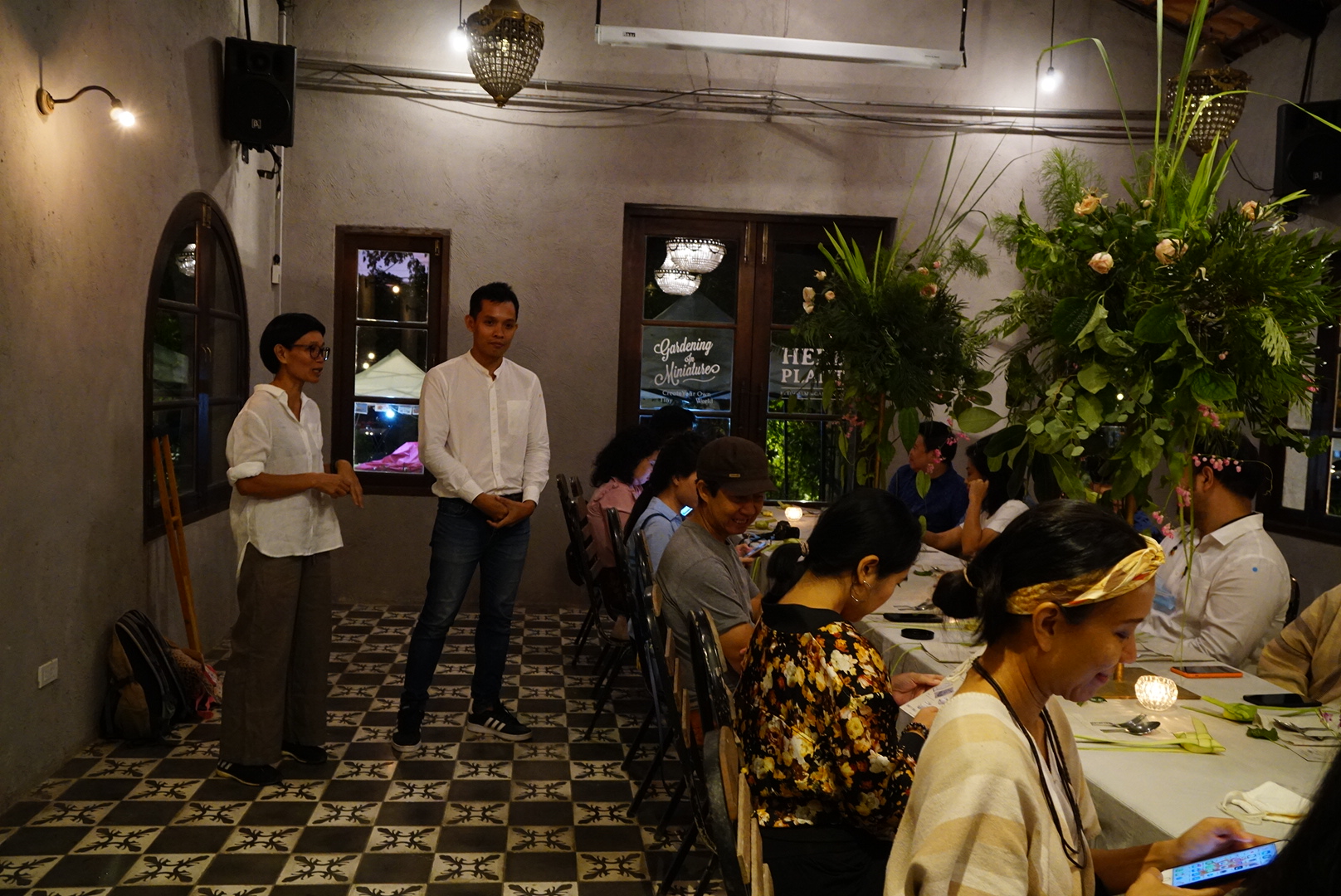 A chef’s table event hosted by Chef Poom (ภูมิ–จักรภูมิ บุณยาคม), of Top Chef Thailand fame, was therefore organised at the conclusion of the first day of the event in order to increase the consumers knowledge and increase product value. 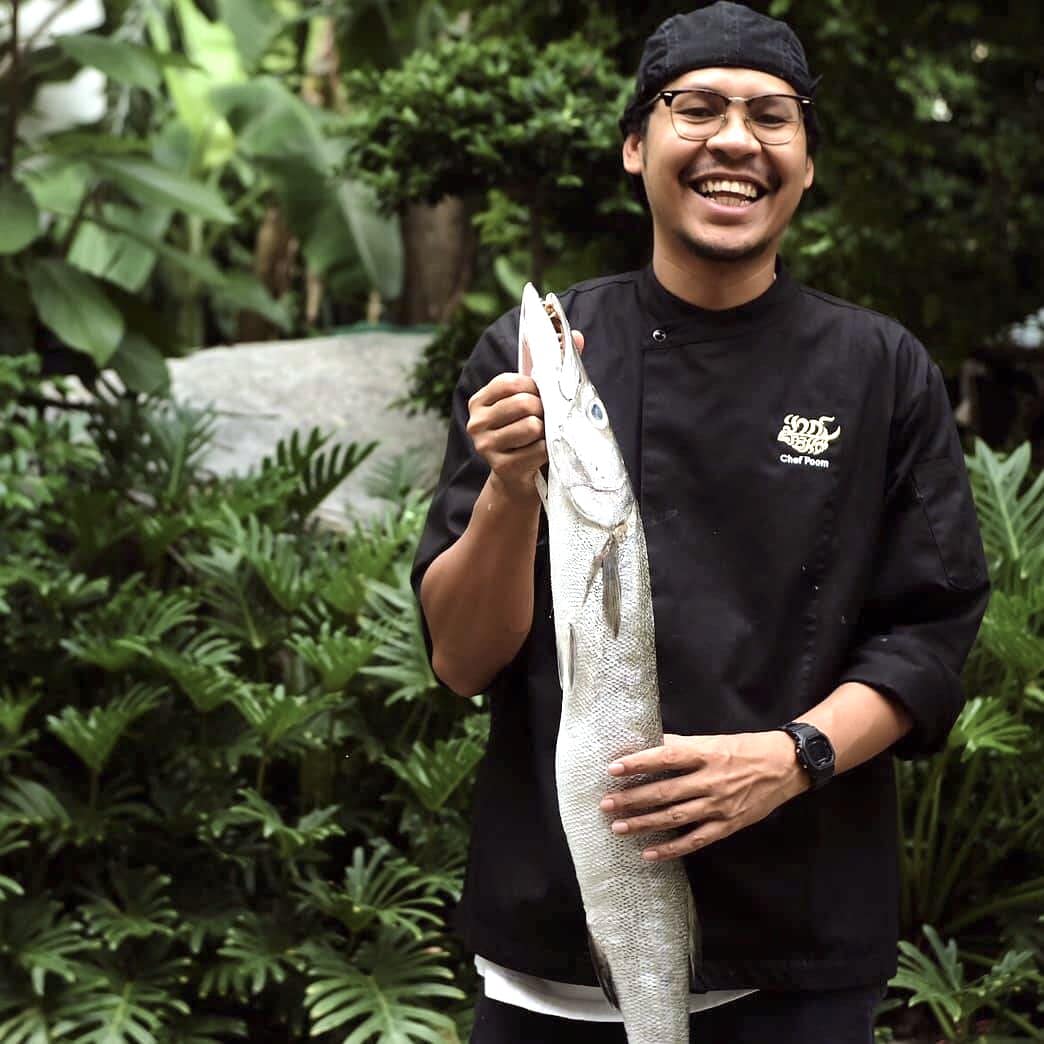 Chef Poom was chosen because he worked with A' La Campagne before, back when he was part of the ‘Thailand young farmers’ a group of then teen farmers representing a new age of Thai agriculture. At his restaurant, Paka, his menu is based on changing and adapting traditional dishes and local ingredients to make them more appealing to the masses while also increasing the value, making him the ideal chef to achieve the goals set out by Charicha and Chokchai for the chef’s table. 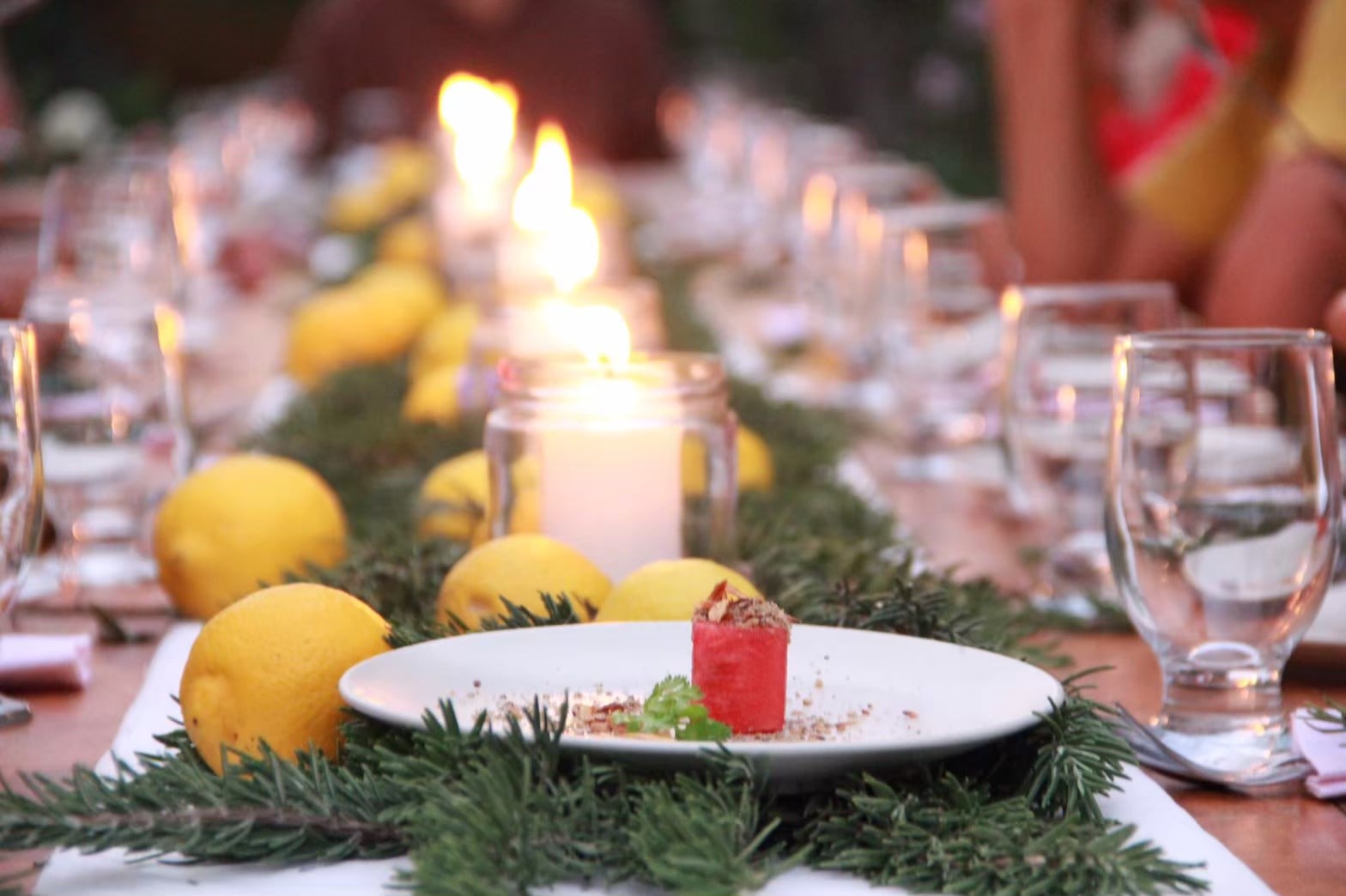 When organising the chef's table, Charucha provided Chef Poom with a list of produce her vendors had as well as what agricultural products can be found in the area, and asked him to create a menu. The final result was a menu comprising of 60% Jai Talad produce and 40% chef Poom’s own organic produce he sourced.
The result was that Chef Poom helped the attendees taste the same flavours they are used to in a different way, Chef Poom tuturned flavours everyone is familiar with into something new through new presentation and methods.

The menu consisted of 6 courses with dishes including 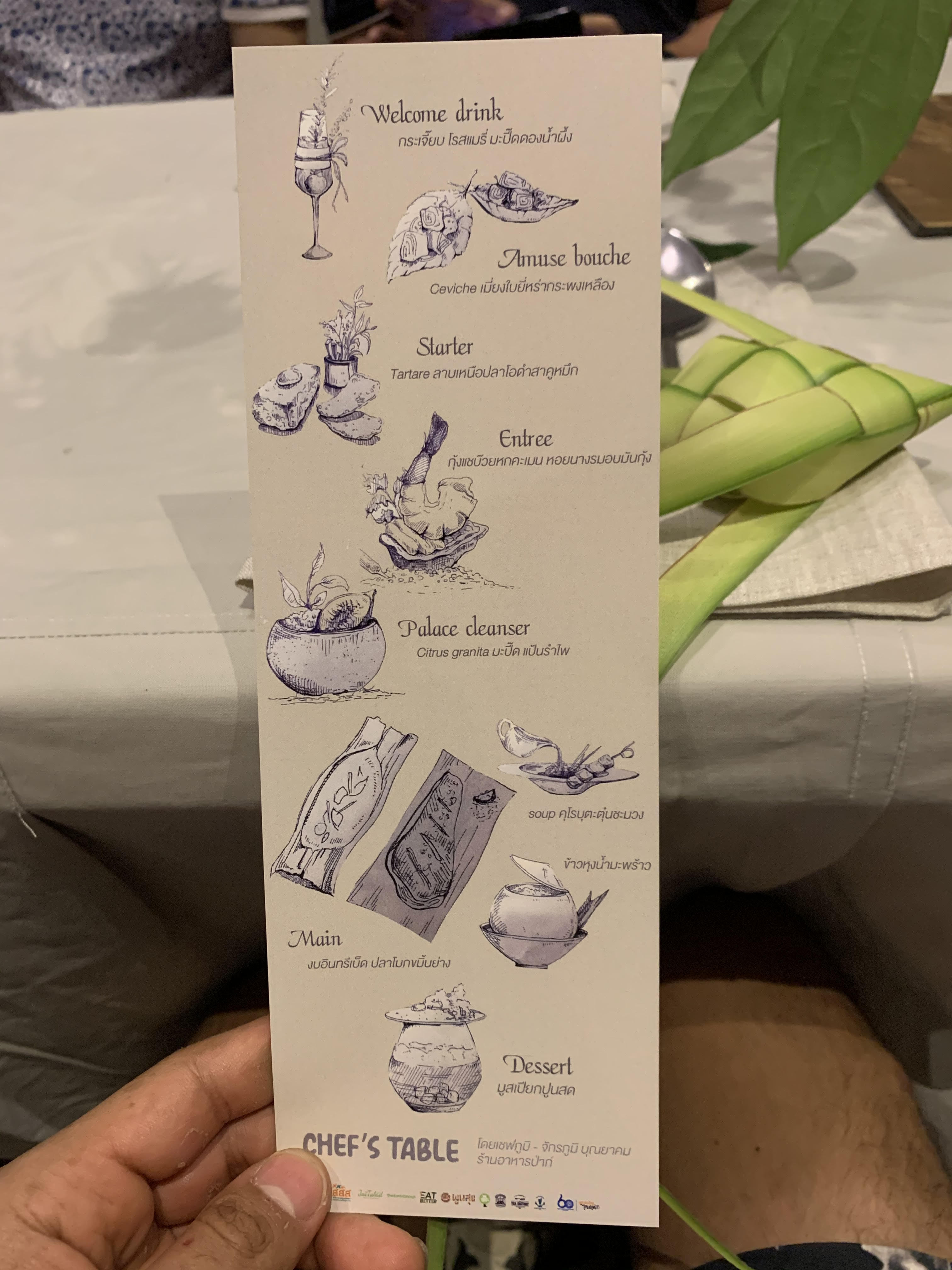 The ingredients and dishes on the menu were simple, including things like passion fruit and local seafood and common traditional dishes like the pork and ‘chamuang’ soup, all of which were familiar to the attendees.
But by applying a twist to what is known, it increases the product value and shows that local ingredients can too be made into something special. The produce found at the market can too be used in dishes considered high end, when the right processes are applied. .The chef's table also shows the diners how the produce found at the market can be used to their full potential.

This becomes another important factor in persuading farmers to convert to organic agriculture. If they see a market place in place that ensures their products will be sold at a fair price, they will be more willing to convert as there is less risk to their income and their family’s livelihoods.

The future
Continuing the more hands-off approach Charucha does not want to run Jai Talad forever, but simply the farmers’ market to become the model for others to host their own farmers’ market in the future. Jai Talad will become a baseline demonstrating what is first needed before a market can be hosted.

The vision is for Charucha and Jai Talad to continue assisting with knowledge and information management, and in some other areas. But at the end of the day, for different people to be able to host their own farmers’ market in various locations.

Charucha and Chokchai will provide people with a Jai Talad management kit which will details a standard what must be included to organise a Jai Talad event. This will be provided for free. But beyond that, any creatives, information on what must be adjusted, food concepts, how to organise chefs table and other extras will be sold
Media Contact
Abhinand Aryapratheep
+662-618-4303-05 abhinanda@wwf.or.th