Bat Pollination In Thailand: A Decade of Research Online Webinar.

20 May 2021
On the 13th of May 2021, WWF Thailand, with support from GO organics Peace International, Earth Net Foundation, and Heinrich Böll Stiftung Southeast Asia, held the latest in the series of ongoing webinars on pollinators.

Organised together as the Asian Pollinator Initiatives Alliance (APIA) the webinar aimed to raise awareness on the importance of pollinators and to encourage actions to conserve them.

The May webinar was titled, 'Bat Pollinators in Thailand, a Decade of Research' and was hosted by Assistant Professor Dr Alyssa Stewart of Mahidol University who has been studying bat pollination in Thailand since 2011.

When pollinators are discussed, people often think of bees and birds, bats are often overlooked. This webinar is  the first in the series to be focused on bats and highlighted their importance, especially for a tropical country like Thailand where many fruits rely on bat pollination.

She is interested in all aspects of plant-pollinator interactions, and continues to study pollinators large and small (from bats to bees), and across a broad range of habitats (from wild to agricultural to urban).’ With a decade worth of experience and research, Dr. Stewart brings a vast amount of information, knowledge, and expertise to the topic. 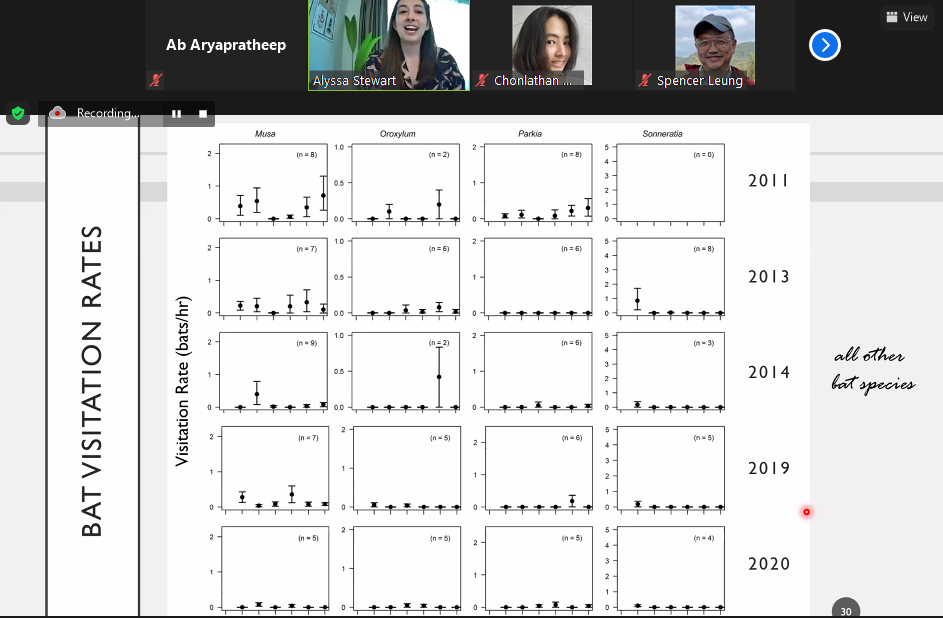 Some Learning Points from: Bat Pollination in Thailand, a Decade of Research with Dr. Alyssa Stewart an APIA webinar, by Michael Commons.

Michael Commons from Earth Net Foundation, who co-organised, combined his personal experience and dicussions with Dr. Alyssa along with the key points from the webinar to write the following learning points. 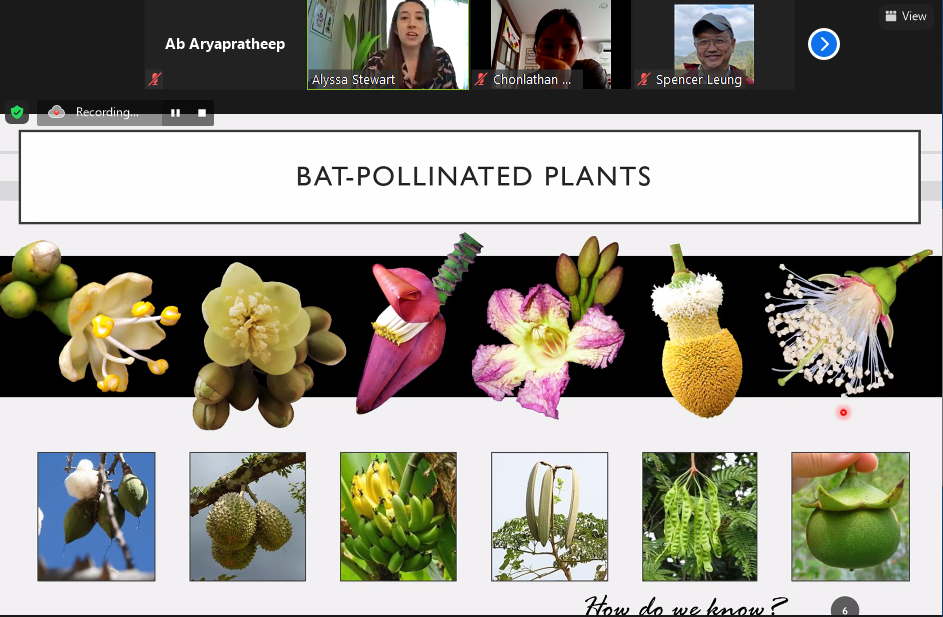 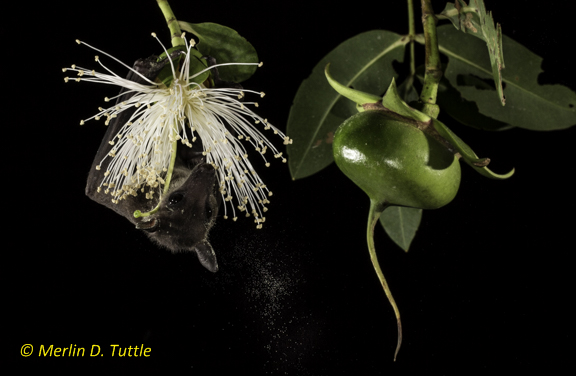 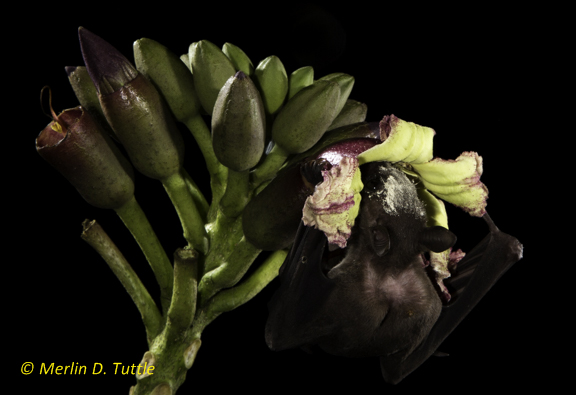 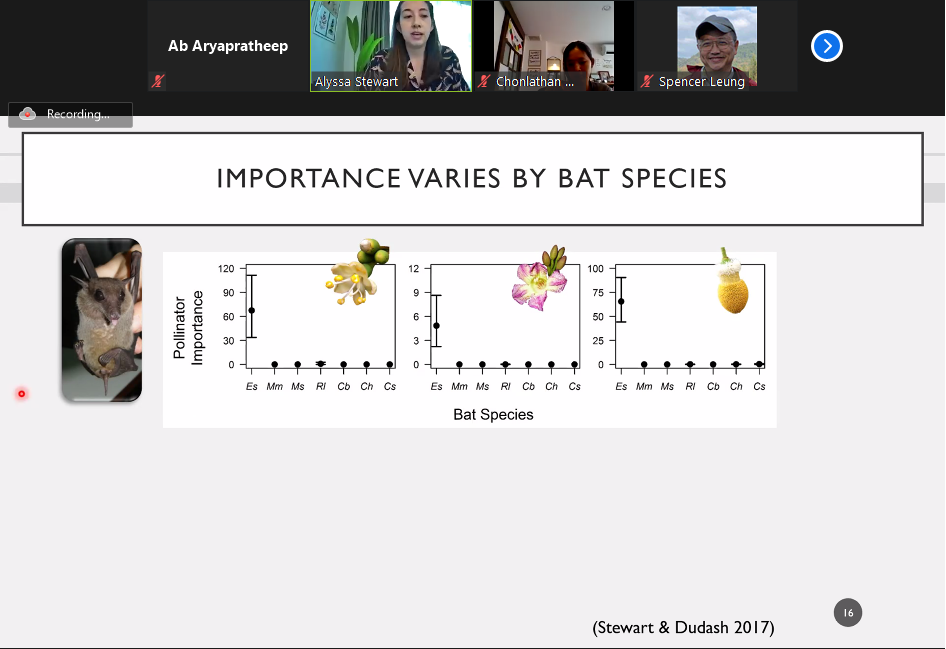 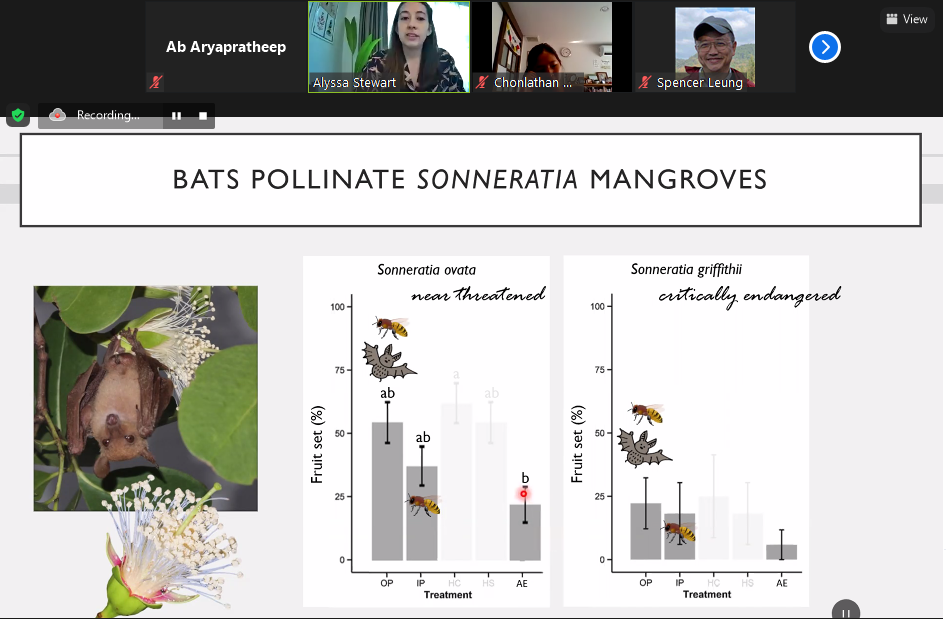 Last as our overall objective is “pollinator restoration”  I asked “If we want to do pollinator friendly gardening- for bats- is this just as simple as planting some of these 6 species? And perhaps not harvesting our banana flowers early to let the bats feed longer?"  (on the male flowers which continue to bloom for some time).

Dr. Alyssa responded, “For more rural areas, yes, definitely. For more urban areas, it's also important that the bats have roosting areas too. I think it is unlikely that we will find the Cave Nectar Bat (Eonycteris spelaea) in Bangkok because they roost in caves. But I have seen Cynopterus bats visiting Phega flowers at the Faculty of Science in Phayathai. These bats mostly eat fruits but also visit flowers, and they roost in various species of palms (and likely other plant species too), and I think they probably roost at Suan Chitlada (which is right behind the Faculty of Science) because it has lots of plants. I have also observed Cynopterus bats roosting in some palm trees in the middle of Prince of Songkla University's campus (in Hat Yai). So it seems like these bats aren't all that deterred by human activity, they just need a place that has enough roosting plants and food plants.”

Then I asked "Is there a strong preference for bats for wild bananas or a certain variety- like Nam Wa. (I have only found seeds in wild bananas and Nam Wa personally.)"

Dr. Alyssa responded, “They like all banana flowers, both wild and cultivated! So planting any variety of banana will provide food for the bats.  Most banana cultivars can't produce seeds (even when they receive pollen) because they are triploid (so when the genetic material is divided during meiosis, some cells get two copies of a chromosome and some get only one, and then during fertilization the chromosomes can't pair properly). Nam Wa is also triploid, but for some reason it can produce seeds when it receives pollen from a wild (diploid) banana. (I'm not sure why.)”

Coming out of this webinar, I feel I have a much better understanding about bat pollination in Thailand and how we can help promote bat pollinator populations as well as areas which I think would be interesting to further explore.  The six genera of plants that are in such a key relationship with bat pollinators are really useful and interesting plants.   If we look from a Permaculture design perspective and different and complimentary values, these genera have a lot to offer.   I intentionally planted many phega or sky tongue trees, which grow like long tall stick with few leaves and thus take up almost no space or light.   I enjoy eating the pods, roasted on a fire first, then peeled and sometimes cooked again in a stir fry.   While I have yet to identify any nectar-feeding bat genera, I regularly see bats come to feed on their flowers.  Bitter bean- parkia, is a leguminous, nitrogen fixing tree, with giant pods of beans.   For me it is another favorite vegetable, which satisfies like meat and thus may be a good choice for vegetarians.  Durian is one of the most amazing fruits.  While from Dr. Alyssa's research almost all of the pollination is done by bats, their flowers are also much visited by Apis dorsata honeybees being an important source of nectar6.  Kapok produces pods full of soft fibers that can be used for stuffing.  I heard from another bee researcher that their flowers also provide a lot of nectar for honeybees.   Bananas are an amazing fruit, and vegetable.  Banana flower salad is one of my favorite dishes.  Wild bananas are one of the most favored foods of wild elephants.  Bananas also are a famous helper species plant, providing moisture, mulch and microorganisms to nearby plants as Jon Jandai recounts in his book on gardening.  While it is more difficult to grow, I remember so well my first night time boat ride in Ampawa about 18 years ago and the lampoo trees lit up life Christmas trees all along the sides of the waterways we passed through.   I also much appreciate the small grove of lampoo trees in Santichaiprakan park next to the Chao Phraya River in the heart of Bang Lampoo.

As the Cave Nectar Bat is such a key species, while Thailand is blessed to have karst limestone mountains all along its backbone which have many caves,  I wonder as to the habitat needs of these bats.   I recall when I lived in Barcelona years back and would walk by Camp Nou, the grand stadium of FC Barca at night, that there were quite a number of bats that would feed around the street lights and appeared to be coming from somewhere in the stadium.   My presumption was that part of this massive concrete structure was functioning as an artificial cave and habitat for the bats.   If Cave Nectar Bats can or do also reside in artificial caves, then building or maintaining such spaces may serve for their habitat needs where natural caves are not present.

Staring our pollinator journey looking a lot at the different Apis species as well as stingless bees, it was really great to connect with a very different groups of pollinators.   Dr. Alyssa's presentation also brought more to light how different pollinators have relationships with different plants.   So while flowers may be visited by a variety of pollinators, successful pollination may be highly dependent on one species.  With this in mind I look forward to learning more about other key pollinator species like hawkmoths, carpenter bees, and honey creeper birds to understand both their relationships with different plants and which plants are highly dependent upon their work, and then about their habitat and other needs, so that we may better manage our spaces to provide them good places to live.